Happy Fall! A number of us have just returned from attending the LTER All-Scientists Meeting in Asilomar, CA. This gathering happens every three years and brings together students, postdocs, staff, faculty and other researchers from across the 28 sites that make up the national NSF-funded network of LTER sites. Sites range from open-ocean to coastal, desert to grassland to forest, arctic to Antarctic. MSP is one of only three urban sites in the network. For many of us, it was our first time attending a conference in person in a long while, and it was a great opportunity to connect with old friends, build new relationships, and explore possibilities for collaboration across sites, which all share a focus on studying human-environment interactions over the long term. MSP attendees led workshops on the effects of urbanization on evolution, knowledge co-production, and the role of legacies of past inputs of phosphorus in contributing to present-day water quality challenges. They presented work on the present-day consequences of past discriminatory housing policies for urban nature and shared our approaches to building relationships with community partners. As someone who has attended these meetings for decades now, it was exciting to hear all the discussion of knowledge co-production, environmental justice, and integration of traditional ecological knowledge and western science. We are all learning and growing together.

The Bell Museum is the lead outreach and education partner for the MSP LTER, focusing on creating urban ecology field trip experiences for middle school students as well as supporting student learning and exploration in their own schoolyards. This summer, the Bell Museum in collaboration with the University of St. Thomas hosted Lauren Reuss, a middle school life science teacher from Benilde-St. Margaret. This summer, Lauren worked with Bell educators and MSP LTER researchers to develop new urban ecology lesson plans and resources that could be used on-site at the Bell and in classrooms throughout the Twin Cities Metro. 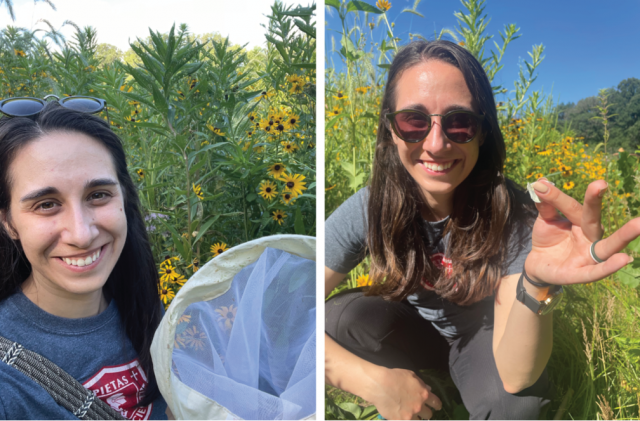 Lauren Reuss in the field

Reuss has been taking a hands-on approach to curriculum development. Periodically, she went into the field to work with researchers on the project. Since the MSP LTER takes an interdisciplinary approach to studying urban ecology, Reuss shadowed a variety of different research teams in the field—including the lakes and stream team, the urban contaminants team (who study squirrels and butterflies), and the pollinators team. She used these experiences to better understand what the researchers were doing (What kinds of questions they were asking? What tools and methods were they using? What kind of data they were collecting?) and to communicate that information back to the students.

Ultimately, Reuss decided to focus on the work of the group studying the differences between urban and rural squirrels, particularly what effects the urban environment might have on squirrel behavior. Squirrels are common in the urban environment and are easily accessible for students to study. After shadowing Charlotte Devitz, a graduate student in Professor Emilie Snell-Rood’s Lab, conducting field research with squirrels on the lawns of the St. Paul campus in July, Reuss was inspired to create a series of lessons focused on squirrel behavior and adaptation to the urban environment. In one lesson, students will study squirrel “boldness.” Students will collect real data on squirrels by conducting “flight initiation distance tests” at home, in schoolyards or nearby parks. These tests measure how close you can get to a squirrel before it runs away. Reuss hopes that by conducting this research, students will see clear patterns and will get excited about collecting and analyzing data. She plans to pilot these squirrel lessons—including one with her students on a field trip to the Bell—later this fall.

Charlotte Devitz handling a squirrel in the field

This work and the MSP LTER has a special place in Reuss’s heart. An environmental science major in college, she shared that it was nice to get back in the field doing science; sometimes teachers get rooted in the day to day—and it’s nice to remember what the big driving scientific questions are. Additionally, she particularly loves the MSP LTER because it can help us appreciate and notice what’s actually happening around us, in our urban environments.

Lauren summed it up well: “It’s important to learn about the environment where students actually live, instead of viewing nature as just ‘wild’ places.”

- Emily Dzieweczynski, Bell Museum. This story was adapted from a post that first appeared on the Bell Blog on 08/11/2022.

Amid growing awareness of environmental injustice, our historical research shows that unequal access to urban green space was no accident. The relationship between wealth, whiteness, and greenness was baked into the landscape as it was first developed.

In 1913, Minnesota state congressman Thomas Frankson purchased 120 acres for residential development along the western edge of St. Paul’s flagship Como Park. Newspaper ads for Frankson's Como Park Addition emphasized proximity to the park and featured photos of the lake and gardens. A creative salesman, Frankson also brought a pair of bison–a species on the verge of extinction–to graze on empty lots and generate excitement (he eventually donated them to the nearby Como Zoo). In the 1920s, Frankson sold 30 acres to complete a municipal golf course at Como Park, another attraction that would raise the value of the surrounding properties.

Aside from these amenities, the newspaper ads touted restrictions embedded in each deed. Frankson inserted covenants that barred people of color from owning or occupying the parcels, one of the first developers to use racially restrictive covenants in the city. By 1916, Frankson had also placed ads in the Swedish-language newspaper Svenska Folkets Tidning, which emphasized many of the same points, illustrating the value ascribed to whiteness in the social hierarchy over primary language spoken or national origin. And this whiteness was linked to economic value, for example, in this advertisement in the local newspaper (Figure 1). 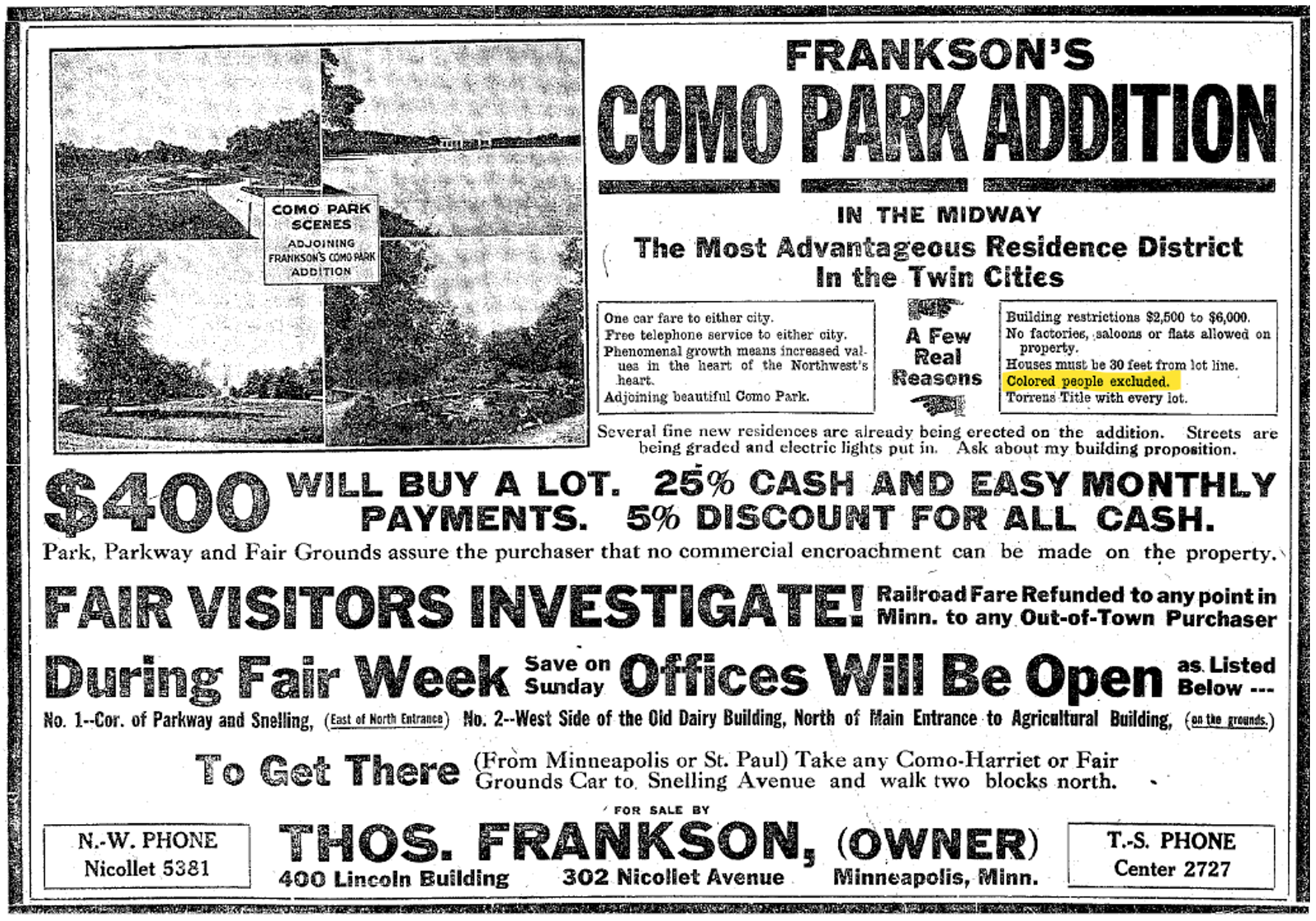 Drawing on the work of Mapping Prejudice to map every racial covenant in the Twin Cities, our research team (which includes professors Dr. Bonnie Keeler and Kate Derickson, post-doctoral researcher Hannah Ramer, and PhD student Rebecca Walker) is exploring how the history of racial segregation in the Twin Cities has shaped environmental outcomes today. We have found that Frankson was not alone in his use of both parks and covenants to produce valuable real estate. In Minneapolis, many of the Park Board’s most important acquisitions during the twentieth century were made through partnerships with segregationist developers. For example, the land to construct the canal between Cedar Lake and Lake of the Isles, one of the essential links in the famous “Chain” of Lakes, was sold to the Park Board by Edmund Walton, the first real estate developer to use racially restrictive covenants in Minneapolis. The canal connecting the lakes opened in 1913, and shortly after, sales of lots in Walton’s development took off, particularly lots located along the new canal. Each lot not only came with a canal-front view but also with the promise that the neighborhood would remain exclusively white, conferred by the racially restrictive covenant included in each deed. As another example, Samuel Thorpe, a prominent Minneapolis real estate giant who was one of the city’s most ardent boosters of racial covenants, sold 49 lots of his racially covenanted development along a crucial mile-long stretch of Minnehaha Creek connecting Lake Hiawatha to Minnehaha Falls to the Park Board for only $1.
This approach to linking nature, race, and real estate value was taking hold nationally too. The ideas were spread through national real estate organizations, trade journals, and speaking tours.
Today, more than 65 years after the last racial covenant appeared in a Minneapolis property deed in 1955, patterns of race and wealth in Minneapolis and its surrounding suburbs continues to follow the pattern established by racial covenants, with distinct pockets of exclusive white affluence and non-white poverty. Minneapolis is home to some of the largest wealth disparities between Black and white residents of any city in the country, ranking 97th and 99th of the 100 largest U.S. metros in the gap between Black and white residents in home ownership and median income.
Racial disparities in Minneapolis are visible not just in wealth statistics but also in the natural environment of the city (Figure 2). Neighborhoods where more than 90% of residents are white (located around the Chain of Lakes, Minnehaha Creek, and in the southeast along the Mississippi River) are spaces of profound environmental privilege, with significantly lower levels of air pollution, more tree cover, less extreme summer temperatures, and far greater park acreage in comparison to the city’s majority non-white neighborhoods. The history of collaboration between the city park planners and the developers of covenanted real estate reveals how these environmental disparities came to be.

Taking a hard look at the history of collaboration between park systems and the racist real estate market makes it clear that parks and the real estate market have always been deeply intertwined. This is particularly important in the context of growing concerns today about “green gentrification,” in which investments in new parks lead to increases in property values and rent prices, threatening displacement of low-income residents. To develop park systems that are truly equitable, pairing new park developments in historically disenfranchised neighborhoods with measures to promote and protect affordable housing like rent control, public housing, and land trusts will be key. Historically and today, a just and sustainable park system is not just about where you put parks but also who is able to live there.

MSP is a new urban LTER program in the Twin Cities studying how urban stressors – climate change, pollutants, invasive species, habitat fragmentation – affect the ecological structure and functioning of urban nature, including pollinators, forests, watersheds, and lakes and streams. We also study how diverse residents interact with and experience the benefits and burdens of urban nature. Ultimately, we aim to better understand urban nature and related policies and practices, to improve environmental out­comes for all residents.
Who: 30+ researchers, educators, and community organizers from the University of Minnesota, University of St. Thomas, US Forest Service, The Nature Conservancy, and Water Bar
What: Long term research on ecological relationships between human and nature in cities
How: A six-year, $7.1 million, renewable grant from the Nation-al Science Foundation to establish a new site as part of the US LTER Network. The grant began in March 2021 and primarily supports postdocs, students, and staff in research, education, and engagement efforts.
Where: Seven-County Twin Cities Metropolitan Area in the State of Minnesota or Mni Sota Makoce in Dakota. What we now call the Twin Cities Metropolitan Area are the traditional, historical, and contemporary lands of the Dakota People.